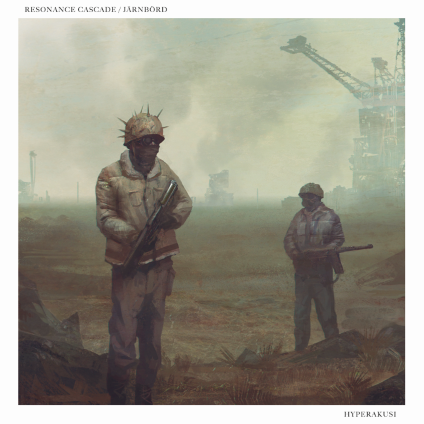 I got hep to Swedish grinders Resonance Cascade back when they dropped their self-titled debut 7-inch back in 2014, but things have been relatively quite in the RC camp—whose lineup includes members of Bergraven, Stilla, and Pyramido—since then. Happily, they’re finally back on the cleverly titled Hyperakusi (which translates as ‘a sensitivity to everyday sounds’), a split with fellow Swedes Järnbörd. The pairing works well, as the two bands different enough (something that doesn’t always happen with grind splits) that their sides offer distinct but complementary listening experiences.

Resonance Cascade’s brand of grind is steeped in the Swedish death metal tradition. I don’t know if they actually use HM-2 pedals, but that’s definitely the dominant aesthetic here – their half of the split kind of sounds like Wolverine Blues played at five times the speed, which is more than fine by me. Unlike a lot of grind, RC seems to be a little more riff-centric instead of just relying on pure speed and aggression, so the relatively clean production on their tracks really serves the well, particular on the roiling intro section of “Dead Peasants” and the crushing second half of “Bricks.”

Järnbörd spike their grind with a heavy dose of crust, and as a result, their half of the split is a much rawer, more frenetic affair. I actually wasn’t familiar with them at all prior to this, so I was pleasantly surprised by their tracks. “Kvarnstenen,” which somehow manages to both blast and swing, is probably my favorite of their tracks, but the dynamic “Du och ditt arbete” is a very close second.

Honestly, both sides of this split totally fucking rip. If you’re into grind you’re going to find a lot to like about both of these bands. I’m really hoping this isn’t all we hear from either of them this year – I need full-lengths from both of them ASAP.

Hyperakusi will be available on February 24 on both digital and physical formats via WOOAARGH and Downfall Records.