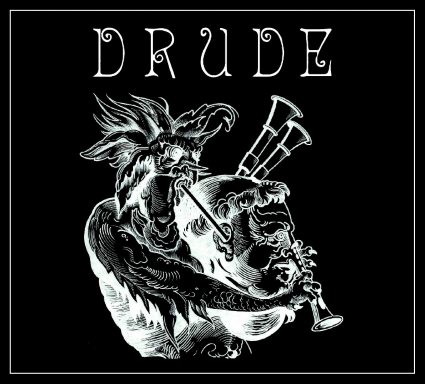 If you’re a regular reader of this site, you probably already know that we’re pretty big Drude fans here at the Vault. In fact, I’m guessing I’ve probably written more about Drude for IMV than any other band. I’ve even written about them for Invisible Oranges. In fact, this isn’t even the first time I’ve written about this album. We got an early copy of it on CD at last year’s Doomed & Stoned Fest, and it ended up being one of November’s Albums of the Month in my The Listening Chaos column, and came in at #9 on my year-end best of list. But since it’s about to be officially released outside of Indy, I figured why not write about it again?

Drude is easily one of my favorite live bands, and with their new self-titled release they’ve managed to capture the energy their live show on record. The best way to describe their overall sound in one word? Dynamic. Like, imagine if Neurosis and Russian Circles had a baby, and then that baby smoked a fuckton of weed: progressive stoner post-metal? Guitarist Jordan Smith has always reminded me of RS guitarist Mike Sullivan in the way that he layers his guitar parts, using a fair amount of effects in order to create different textures between the layers. The first couple of minutes of opener “Drude” are a perfect example –a different guitar part comes in every four bars, each with a slightly different but complementary effect on it so that they blend together but can still be differentiated from each other if you listen closely. When the distortion kicks in, the song moves more into Neurosis-style territory, but not just because of the bellowed vocals and bombastic bass, but also the way that the parts push-and-pull against each other, building and releasing tension as they go. I lost track of how many different interlocking sections there are in just this one track, and every single one of them feels absolutely necessary. They’re such skilled songwriters that they can drop a few measures of straight-up hardcore into the middle of the song and it doesn’t feel out of place.

The rest of the album follows in a similar vein as the first track, with each song branching out and exploring different stylistic spaces. The first couple of minutes of “Barbelo” lock into a super-tasty stoner metal groove before transitioning into a spacy clean guitar section that almost sounds Pink Floyd-ish before eventually ending up in more sludgy territory. Both “Oasu” and “Demure” balance spaced-out sections with heavier passages and have more killer riffs in them than I could possibly list. In terms of riffs, though, they save the best for last – the slippery main riff to closer “Eidolon” actually sounds impossible in its complete disregard for time signature, but like everything else on the album it snaps perfectly into place. There’s also some damn near black metal sections in the song.

In my original review of the record, I said that the band took everything that was great about their last album The Tide to Sink the Summit (released under the name Burn the Army) and improved on them all. The playing is tighter, the vocals sound more confident, and they take a lot more risks in the songwriting, basically all of which pay off. For all intents and purposes, this album is damn near flawless, and I’ll be stunned if it doesn’t help them break out beyond the Indy scene.

Drude will be available on March 3 from the Drude Bandcamp page.