Wow guys, how’d you come up with the name for this one? You had ten years to think of an album title, and the best you could do is your own name? I kid because I love. Rammstein and I go way back to middle school, right around the time I started taking German language classes. In those days, if you searched for German music online, Rammstein was the first band you found, which meant stumbling upon videos of the band’s insane live performances. As strobe lights pulse and fire and fluids fly through the air, vocalist Till Lindermann, with his makeup running, would somersault and gyrate on stage while belting out the coolest German metal this side of the Berlin wall. Infectious and subversive, Rammstein’s brand of industrial metal lends itself to repeat listens, which also happens to help with foreign language comprehension. They stuck with me for about 12 years until I graduated from college with a minor in German, which I get to knock the dust off for this review. Rammstein’s last album Liebe ist für alle da came out in 2009, and it has stood as my favorite in their catalog since. Could their next best album lie gleich um die Ecke? German inside jokes aside, let’s jump in and have some Spaß.

Let me just get this out of the way: opener “DEUTSCHLAND“ introduces a heavy synth riff that sounds scarily similar to “MEGALOVANIA” from the UNDERTALE soundtrack, and it’s hilarious. A wiry Richard Kruspe riff weaves in between the electronic notes, sounding as if AC/DC was playing “Thunderstruck” in a damp Berlin club basement. “DEUTSCHLAND” is a strong start that transitions into the strangely smooth cut “RADIO,” but it’s definitely one of my favorite songs on the record. Abstract keyboard work by Flake blips and bleeps in both channels like an Aphex Twin suite and the singalong choruses have the perfect balance of cheesiness and authenticity that you’d come to expect from Rammstein’s lyrics. The band sounds as energetic and manic as they did on early efforts like Herzeleid and Sehnsucht, with the Wagnerian “ZEIG DICH” standing out as one of the thrashier tracks on the album. For the heads out there, “ZEIG DICH” is like a present-day “Asche zu Asche” or “Laichzeit”, and it’s a most excellent song on this polarizing project.

I don’t normally pay much attention to lyrics in metal, but when a band puts them on full display, I take notice. And while my German is rusty, comprehending Rammstein’s lyrics isn’t very demanding. Trust me; there’s not much lost in translation on songs like “SEX,” which features some classic Rammstein cringe, though is carried confidently by Lindermann’s charisma. His powerful vocal performances have shaped Rammstein’s kraftvoll reputation over the years, spreading their message of prurient nihilism through his sinister bass register. Till is the only vocalist who can get away with being this corny, because he seems genuine in his sometimes goofy delivery; when Till croaks out “wir lieben…sex” at the 2:50 minute mark, you’re actually both laughing at how silly that sounded. On the catchy “ÄUSLANDER,” Lindermann stunts on other metal frontmen with his clever multilingual verses in what is guaranteed to be a huge hit on the European stadium tour. Musically, Rammstein deftly manages to meld grimy industrial with kitschy Europop, with some genre surprises in between. The mid-tempo “WAS ICH LIEBE” (“What I Love”) slowly unfolds into a heavy alternative metal jam, and the growled hook “Auf Glück und Freude/Folgen Qualen/Für alles Schöne…” sounds sehr badass. 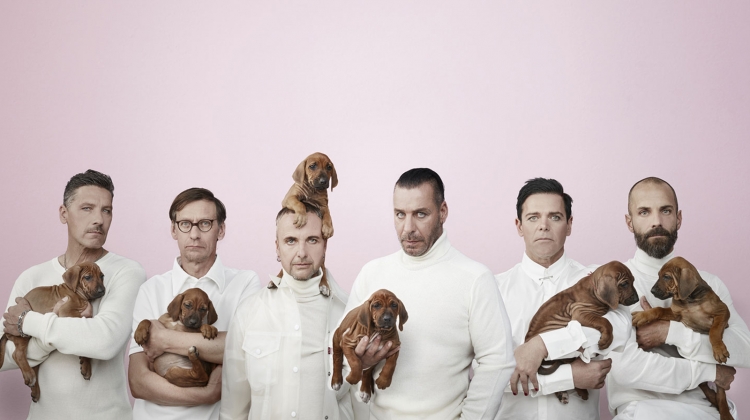 And then there’s “PUPPE,” which is where things start to fall apart. I don’t know what the point of this song is, besides maybe to bring nu-metal back from its shallow grave, but it seems out of place here on the album. This midway track features a convincingly psychotic performance by Lindermann that gives off severe Jonathan Davis vibes, but unlike early KoRn, I’m not into this. When Rammstein misfires on this album, they don’t just miss the mark, but they shoot themselves in the foot. “WEIT WEG” (“Far Away”) is a criminally boring alt-metal song that should’ve been left for dead in 2003, and skippable “DIAMANT” (“Diamond”) stands out as personally the most disappointing. On their last album Liebe ist für alle da, Rammstein proved that they’re capable of sincere balladry (see “Roter Sand” and “Frühling in Paris”), but “DIAMANT” is an aimless interlude that only pads the runtime. The penultimate “TATTOO” provides some late-album intensity with menacingly fun choruses and cheesy-cool lyrics, and it’s a prime example of Rammstein’s enviable industrial guitar tone; but then, the album ends on arguably the worst Rammstein song ever recorded, the baffling “HALLOMAN” (“Hello Man”). From the point of view of an ostensible “boogeyman,” Till directs lecherous attention at a young girl (“hallo kleines Mädchen”…yikes) and basically attempts to lure her to him with treats. “HALLOMAN” is about 20 years too late to be this unnecessarily creepy, and it ends the album on a sour note. It’s not cool, and I hate that it’s the last song on this otherwise satisfying album.

High-octane and addicting, this eponymous new LP is front-loaded with great-to-excellent bangers that sound like what I wanted out of a long-awaited return. The lack of a true ballad is disappointing because I know Till and the guys are capable of genuinely emotive songwriting, but there’s plenty of great alternatives and industrial metal to satiate this Sauerkraut. While it’s not great that there are about four skippable tracks out of the eleven-song roster, all the others are at least 8/11s on the rock-scale; however, Rammstein’s tongue-in-cheek lyricism is transgressive to a fault and unfortunately inhibits my enjoyment of the album. I’d honestly give this album a low B+ if it weren’t for “HALLOMAN,” but I cringed so hard, the points fell off. So, just like my German classes back in college, Rammstein is going to pass this semester, but they need to work on their vocab.

Rammstein was released by Universal on May 17th.

You can buy Rammstein at this online retailer, or wherever fine records are sold.

Track Premiere: Victims Of Contagion – “Sisyphus (The Virtue Of Suicide)”