Whew, just got back from summer vacation, and boy, is it hot outside. I visited the moist and dank realm of Michigan for eleven days, where in the summer, you’re never dry. Then, I had to return to the godforsaken wasteland that humankind knows as “Phoenix,” where it’s only comfortable if you’re a cactus. Don’t get me wrong, I had a great time shotgunning beers with my cousin Sam and practicing my relationship management skills in a sweltering house with 10 family members, but I’m feeling glad to be back in the air-conditioned solitude of my writing room, aka, the Walmart folding chair that acts as my laptop stand. I was going to get started on reviewing the new Tomb Mold album (one of my most anticipated releases of the year), but I’m going to let that one ruminate for a bit. In the meantime, now that the A/C is blaring like the tinnitus in my ears after an Earth show (B- by the way), let’s get down with a dark and dismal powerviolence album by a happily-named bunch of friends from the Chiba Prefecture of Japan.

Every time I read the word “powerviolence,” A Clockwork Orange immediately springs to mind. Maybe you’d think that I’m too deep into my milk-plus, but in this case, it’s an apt comparison, because the intensity that Friendship conveys is ultraviolence-incarnate. The band describes their sound as “audible torture,” and if I didn’t like this kind of music, I’d have to agree with them. After a skippable intro track (as all intro tracks are), we’re treated to some super brutal powerviolence vocals on “Vertigo.” They’re deep and aggressive, and they complement the band’s fast-‘n-heavy hardcore guitars and thick, swampy drums. Every so often, a lighter yet equally sinister shouting voice pops in to harmonize with the lead growler, and this backup singer adds just the right amount of depth to these grind-inspired songs. I’m usually not a fan of clean hardcore vocals, so these grindcore yawps are right up my alley.

Through a wave of distortion, the tracks dissolve into each other and function as one gnarsty 22-minute ride. Plucked out of the chaos is “Punishment,” a somewhat groovy and vicious powerviolence romp made only of rough edges. This track goes a lot of places with distinct riffs, hooks, both types of vocals, and a sweet song length. In fact, this statement applies to pretty much every song on Undercurrent. Kick to the face, now you’re listening to “Lack,” with its screeching guitar notes that punctuate the song’s brutal rhythm of chanted screams.  A barrage of squealing electric guitars later and Friendship straps you to a torture rack made of power chords cranking in sequence on “Abandon,” twisted into a breathless pretzel in uncompromising positions, but I like it so far. 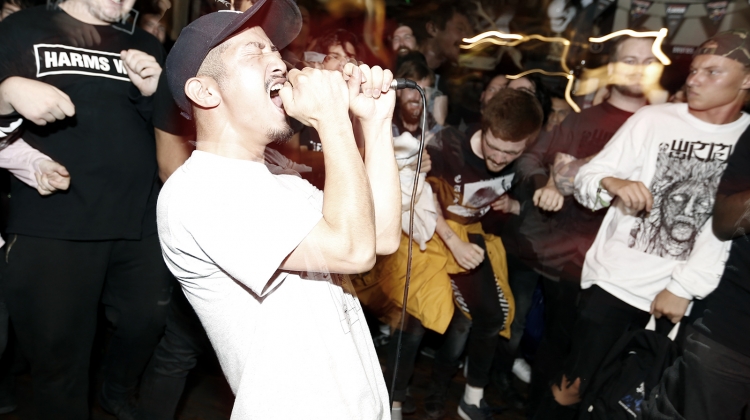 The skulking “Fiend” features slower instrumentation with a relentless vocal barrage, which is doubled up with those slightly-less inhuman backup screams. In this instance, the two gruff singers harmonize in a dark, unfriendly way that works very well, and they outshine even some death metal vocalists on tracks. “Plague” has a tenuous buildup of high fretboard chords amidst galloping drums, and “Garbage” might as well just be a grindcore song. Every song manages to do something different, and for such a short album, it’s important to keep things sharp and unpredictable. Knowing that the next track is likely going to surprise you with something exciting adds not only to my overall enjoyment of Undercurrent but also to the chances that I’ll replay this bad boy on the treadmill come Monday evening.

Undercurrent is a brilliant expression of disciplined brutality, or it’s an album to help you get through leg day at the gym. This is a furious piece of powerviolence with very few flaws to speak on, and the album makes up for most of its low points with its perfect runtime and addicting execution. Friendship plays a type of music that got me into extreme metal years ago, though it’s less nostalgic and more dynamic and new. A lot of people enjoy hardcore music for different reasons: to relieve stress, to find their community, to find themselves, or to get hammered with your cousins. Wherever your fancy takes you, I hope you end up above the Undercurrent.

You can listen to this happy jams at their Bandcamp page here.

Album Review: Havens – On the Verge of Collapse

Live Shots: In This Moment at Old National Centre

Album Review: Caustic Casanova – God How I Envy the Deaf