Have you guys read about the UFO video recordings made by the US Navy? In the wee years of the millennium, Navy pilots experienced seeing what they described as “Tic-Tac”-shaped objects maneuvering throughout the airspace with deftness and speed heretofore unseen, inspiring an international coalition of ufologists to postulate the origin of these hypersonic breath mints. A short video demonstrating the behavior of these anomalies was recently verified by the Navy as authentic, and the military branch even confirmed that they have related “TOP SECRET” content that remains classified. What could the Tic-Tac-shaped flying objects be? Are they extremely advanced drones? Extraterrestrial RVs carrying Grays on vacation? An elaborate marketing ploy by mint producer Ferrero? No one knows, but I’d like to imagine that they’re vehicles carrying otherworldly metal bands, lost while space trucking to a gig in the Andromeda. Your guess is as good as mine, but when I’m listening to the sci-fi brutal death metal of Wormhole, I want to believe.

Well, that’s technical slamming brutal death metal, to be specific. I know some bands recoil when
pigeonholed into a specific genre, but the way Wormhole classifies their sound is downright taxonomic;
though, as someone who finds utility in the concept of “genres,” I appreciate it. A supergroup with a
highly-technical pedigree, former and current members of Equipoise, Cognitive, and Vale of Pnath
indulge their grimier ideas on The Weakest Among Us without sacrificing too much instrumental flair.
The diversity of the members’ musical resumes works in Wormhole’s favor, and it’s evident that below
the swampy surface, there’s more to TWAU than chugging power chords and blast beats.

But, this is a brutal slam record through and through, and the titular opening track delivers the goods
with murky fury. Perihelion guitarist Anshuman Goswami provides the vocals, which sound more
subterranean than a basement in a bottomless pit. Goswami’s singing technique is classically brutal, and
he can growl, gurgle, and squeal like a pig, though, no matter how guttural Goswami goes, he still
sounds human (which is infinitely better than sounding like a robot). The eponymous song demonstrates
the technical skills that the musicians earned in their side-projects, as dual guitarists Sanil and Sanjay
Kumar (of Cognitive and Equipoise, respectively) spring open a box full of twisty riffs and curly hooks. To
me, though, the star of the show is Alex Weber and his omnipresent bass guitar. His disgusting bass
tone alternates between “sewer-creamy” and pseudo-mechanical, a collapsing factory of sheet metal, electric flecks, and organic viscera, and it clangs and bangs up against the complex guitars
and Matt Tillett’s percussion work throughout The Weakest Among Us. Weber’s abilities on bass
ratchets up my personal enjoyment of this album and imparts a memorable quality that I usually don’t
associate with slam metal. 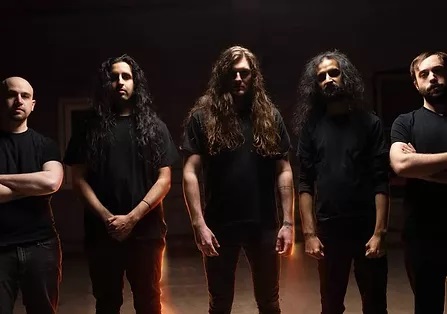 At twenty-eight blistering minutes, The Weakest Among Us runs on a tight if uneven, schedule. Intense
metal records sometimes benefit from a shorter runtime, and this is also true for Wormhole, whose
extreme brand of slam rarely overstays its welcome. However, the album’s sound mix exhibits a strange
hollowness that makes the music either strangely intimate or reclusive and shy. Maybe it’s just my ears,
but intermittent moments on tracks like “Unfrigid” feel distant, like a backroom washing machine with a handful of coins whipping around during a spin cycle. Slam can be a fun genre to mosh and jump around to in concert, but on recording, I prefer sound mixes that are heavy and expansive, e.g., Devourment’s insanely heavy new album Obscene Majesty. Also, during repeat listens, some of the slam and tech movements on TWAU age less gracefully than others. However, there’s a satisfying thread of progressive metal connecting most of the album’s musical concepts. I hardly noticed these proggy details on my first go-around. But, if you follow the guitars and bass closely, there’s cheeky melodies and interesting moments that allay some of the repetitiveness.

Anyone who remotely enjoys slam metal needs to give The Weakest Among Us a fair shake. Armed with the
technical and progressive songwriting chops of its experienced players, Wormhole prove themselves as an above-average brutal death metal band. I’ll be leaving the title track on my iPhone for a while, and though I don’t foresee myself returning to TWAU very often in the future, it’s a promising start to 2020 and overall, totally good. Put this one on while you’re stargazing, contemplating other worlds, or trying to solve the US Navy’s “Tic-Tac” UFO boondoggle.

The Weakest Among Us was released on Lacerated Enemy Records on January 14th, 2020.

You can buy this album and other cool Wormhole stuff here.