Kralice is like the Voltron of metal. Messrs. Marston, Barr, McMaster, and Weinstein are all highly skilled musicians who play in a number of outstanding bands—including Gorguts, Geryon, Dysrhythmia, Behold the Arctopus, Orthrelm, Withered, and Anicon, just to name a few—but when the four of them come together to create music as Krallice, they are so fucking good that it almost isn’t fair. Prelapsarian, the band’s sixth full-length and eighth release overall, which was released digitally at 5:44 am on December 21 (the exact time of the Winter Solstice), is another absolute jaw-dropper that sees the band moving even further away from the progressive black metal of their earlier albums into much more challenging—and, ultimately, enjoyable—territory. 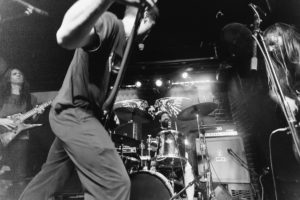 Krallice has never been the sort of band that shies away from writing challenging music, but the four tracks that comprise Prelapsarian might be the densest and most technical in their entire catalogue. Built on a familiar foundation of layers of prismatic riffs, polytonal tremolo-picked lines, and a hefty dose dissonance, what separates this record from previous releases is that there seem to be more dynamics at play: for example, the almost ambient middle section of opening track “Transformation Chronicles,” or the numerous turn-on-a-dime shifts in tempo and key on the breathtaking “Conflagration,” which ranks among the best things they’ve ever done. Perhaps most interesting, though, is “Hate Power,” the track they recorded for the Adult Swim singles series. It’s recognizably Krallice, but it’s unlike anything they’ve ever done before, almost like a glimpse of what they’d sound like as a hardcore band - still technical and chaotic, but almost moshable in places.

None of the technical prowess or tonal dynamics would mean much, though, if the music weren’t still accessible. Fortunately, Krallice has always excelled at balancing their musical dexterity with stellar songwriting, and Prelapsarian is no exception. I think much of that has to do with the way they record; a lot of technical music ends up sounding very cold and heavily processed, but Krallice records always sound like four dudes together in a room jamming these impossible-to-play-sounding songs out. The guitar tones are warm, the bass is clean and audible in the mix, and the drums don’t sound triggered.

In all, Prelapsarian is another flawless record by a band that seems capable of releasing nothing but, and it’s another giant step in the stylistic evolution that began with Ygg huur. If you’re a fan of progressive, technical, or avant-garde metal and aren’t yet hep to Krallice, this record is the perfect place to get familiar.

Prelapsarian is currently available digitally and on CD via the Krallice Bandcamp page. Gilead Media will be releasing in on vinyl in March, which can be preordered here.

by Clayton Todd on February 21, 2017
As regular readers of my monthly column The Listening Chaos likely already know, I am a huge fan of dissonance in technical death metal. One of my all-time favorite records is Gorguts’s Obscura, and as a result I’m [...]
Comments
Leave a reply 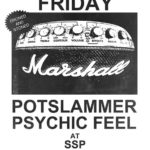 Black Friday: Droned and Stoned with Potslammer and Psychic Feel 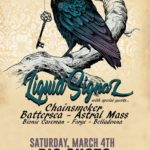