Thrash metal is an easy genre to fake. It’s writable by people without any training or even an ear for good music and it’s playable by sloppy musicians.  This is why thrash is an oversaturated market. The 80s and 90s had brilliant thrash classics but they floated in a sea of bargain bin filler. The same pattern persisted in the “thrash revival” of the 2000s. It’s so easy for a group of kids to string together some SICK RIFFS and KILLER VOCALS on a MySpace page (yes, I’m dating myself) and call themselves a thrash band. Of course, that throwback movement wasn’t all bad. Today we enjoy the survivors still putting out decent to great records like Vektor, Exmortus, Skeletonwitch, Havok, and the like.

The thrash revival also seemed to light a fire under the asses of the veteran bands because bands like Kreator, Overkill, Testament, Anthrax, and Exodus suddenly started writing much better albums with some even producing career bests and expanding their audiences. Soon smaller thrash legends followed suit and bands who were thought to be lost forever started cashing in. Forbidden, Helstar, Heathen, Sacrifice, Artillery, even Exumer all chipped in with long awaited follow-ups, usually with mixed results. It’s difficult to bottle up musical talent for 20+ years and expect a strike to the very cold iron to produce something great, especially in a genre like thrash that relies so heavily on the vigorance of youth and/or creative innovations, but try they did. 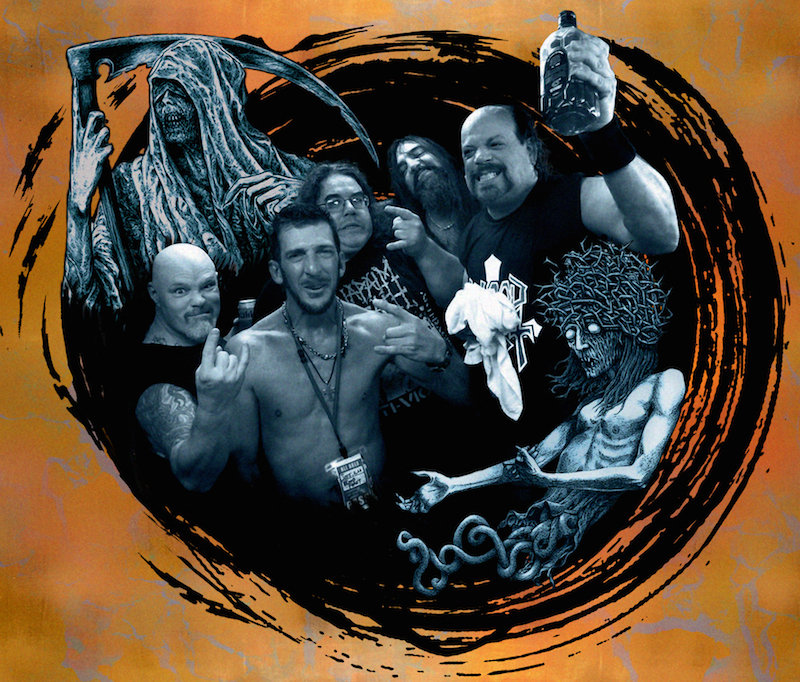 Blood Feast was not an innovator and they never wrote a huge classic. They were part of the sea. Despite the small scope of their operation, they did manage to put out some decent material. Their brand of death/thrash on their debut album, Kill for Pleasure, and following EP, Face Fate, had all the speed of Slayer and brutish simplicity of Celtic Frost with a spin of absolute insanity. They are like a Saw film: extremely enjoyable under the right circumstances but not exactly Oscar material. Of course, this isn’t the intent of the band. Blood Feast’s biggest asset is their absolutely relentlessness and sloppy nature. So can they repeat it for their comeback album?

Sort of! In many ways, this Blood Feast’s best record. Ironically so, because this really isn’t even Blood Feast. It’s original guitarist, Adam Tranquilli, and friends. As a result of the huge line-up change, the record has a very different feel than any of Blood Feast’s previous records. The guitar work is much cleaner, more focused, and efficient. The songs have more than just a few caveman riffs separated by a misplaced sloppy solo. The thick and bassy crust-punk tone of the 80s records has been replaced by a more buzzsaw-like tone. The vocals are also very different. The new singer, Chris Natalini, is less in the death/trash vein and more in line with Paul Baloff or Don Doty on Darkness Descends.

While Blood Feast manages to improve their sound, many lovers of their old records may find this new one disappointing. Part of the appeal of B-list thrash metal IS it’s sloppiness and uncontrollable energy. Some of that firepower is lost here to the louder, stagnant production and compositions that are trying too hard to recapture the past. This record would have been much more beloved had it dropped during the re-thrash craze. Thrash metal collectors will enjoy some catchy tunes like “The Underling” and “The Burn” but in a year where Power Trip, Havok, Kreator, Overkill, and Iron Reagan have already put out some potential thrash classics, it may be hard to find a good reason to pick this album up.

by Joe The Bear Whitenton on May 10, 2017
Montreal’s Show of Bedlam sound like a mix of Neurosis, Oathbreaker, and Swans. Their sophomore album, Transfiguration, is full of odd sound clips, industrial influence, and extreme dissonance that add up to a [...]
A-

by Joe The Bear Whitenton on April 28, 2017
2017 has seen plenty of newcomer death metal bands that break the mold. Artificial Brain, Aeternam, Sunless, The Ominous Circle, and Tomb Mold have all given some grizzly and forward-thinking offerings. Venenum joins [...]
B

by Joe The Bear Whitenton on April 11, 2017
Ah, brutal death metal, one of metal’s most tenacious and consistent institutions. It seems like every year, despite the genre being firmly out of style, metal listeners receive an absurdly monumental serving of it [...]
Comments
Leave a reply