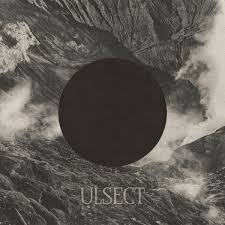 Ever wonder what a band containing members of Dodecahedron and Textures would sound like? Well, that’s a mighty impressive coincidence, since Ulsect happens to be just such a band! 2017’s seen a huge amount of WEIRD metal come out, with the aforementioned Dodecahedron being just one of the many purveyors of children’s’ nightmares to peddle their wares for our listening displeasure this year. So in a sea of dissonant riffs and odd time signatures, how do Ulsect stand out?

The answer of course, is breakdowns. If I was a bigger dickhead than I already am [ed. note: oh dear Satanas please no], I’d say this music is the adult phase of deathcore (ignoring, of course, the wealth of recent top-shelf deathcore albums I’ve been enjoying this year). It’s got the breakdowns and over the top brutality, but gone are the juvenile songwriting cliches and trend-hopping haircuts. What we’re left with is a nightmarish album of sharp, angular riffs and discordant melodies contrasting with polyrhythmic drums and some pleasantly jangly bass lines.

This is one of those albums that’s quite clearly meant to be listened to cover-to-cover, as no songs really stand out from the pack, yet every moment feels essential to the overall listening experience. And let me tell you, it’s quite the ride. In fact, the illustration on the cover gives you a pretty accurate depiction of the album as a whole: surrounded by roiling chaos, you’re constantly sucked into the middle of it all, like a massive fucking black hole has you in its gravitational pull. Whenever I felt my mind begin to wander while listening to Ulsect, the album would punish me by dropping a slobberknocker of a riff on me, and I’d instantly be back at full attention.

The breakdowns are just as heavy as you’d expect them to be, but come when you’d least expect them to. When these guys decide to toss in a breakdown, it’s not because they want to “open this fucking pit”; it’s because they’ve decided that your spine should no longer be in one piece. A metal reviewer’s worst nightmare is running out of ways to say “brutal” and “heavy,” and that horrible fantasy is my current reality. I don’t know how to accurately describe just how fucking nasty these breakdowns are. Every time a bell rings, an angel may get their wings, but every time an Ulsect breakdown hits, a sweaty metal dude gets three pounds of hair on his chest and a new tattoo. They’re just that heavy.

But with great heaviness comes great responsibility, as the saying goes. When everything is brutal, nothing is brutal. If you want every riff to have as much impact as the last, there must be dynamics. There are ambient moments on Ulsect, but not enough to keep it from feeling like a massive 48 minute beatdown session. The riffs would hit just that much harder, the breakdowns would be just that much more intense if we were given a track or two to simply collect our thoughts and wipe the liquified brain substance from our nostrils. This is something I really hope the band considers for their next album.

It’s not exactly year-end list worthy, but fuck, I liked Ulsect. Ulsect clearly know their way around a breakdown, and their creepy, dissonant atmospheres are truly alienating in the best way possible. When the inevitable follow-up drops, I’ll be first in line to preorder it. This is a band that’s going places, mark my words.

You can buy Ulsect from Season of Mist.

Metal enthusiast and owner of over 1000 opinions. Proud Canadian and Avenged Sevenfold fanboy.

Culling The Herd: KISS – Hot In The Shade