Emerging from the forests of Copenhagen, Denmark. Solbrud throw down raw atmospheric black metal with a progressive spin. On June 9th the Danish quartet released their 3rd full length via a collaboration between Vendetta and Indisiplinarian. Coming in at just over the 50 minute mark but consisting of only 4 tracks, Vemod is an grandiose adventure into the end of humanity. Songs that venture into the plus 10 minute range can tend to get boring, especially if the band can’t find a way to keep the listener wondering what will come next. That is not the case here. This quartet have a knack for keeping things fresh as they move through waves of intensity and emotion. 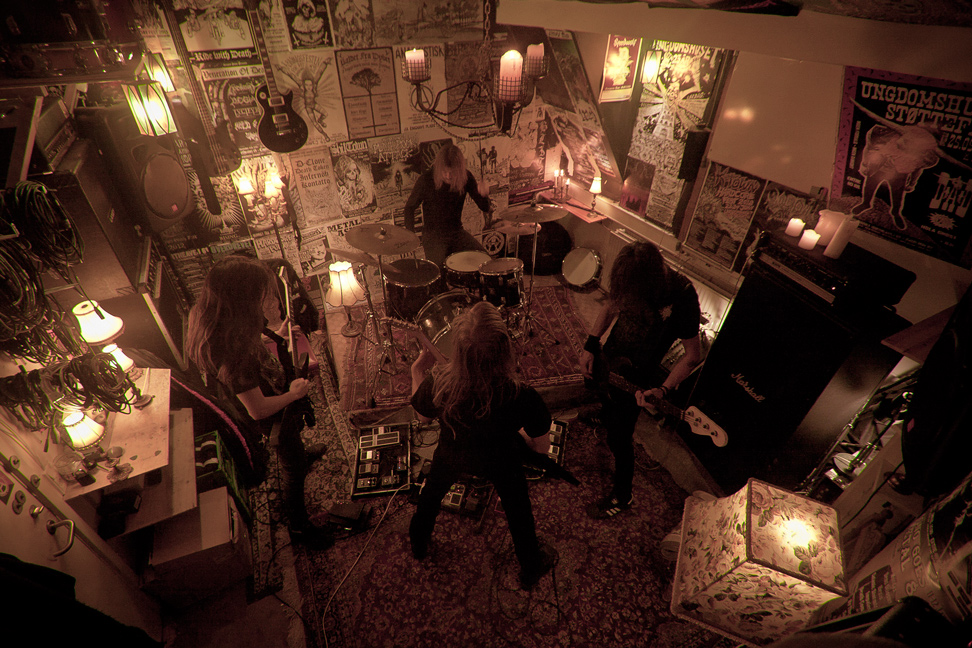 Like so many atmospheric albums before it, Vemod begins with the sounds of a thunderstorm which is just fine by me! Followed by some clean melancholy guitar riffs with a tiny bass line growing out of the earth building the tension. The rhythmic pounding of drums fills the open space with shadows like rain clouds over the valley. The lo-fi storm of black noise that comes next throws you off the cliff and lets you know this isn’t going to be a linear experiment. Then we get into the meat of the sound. Despite the mostly raw black metal sound reminiscent of 90’s Norwegian bands, Vemod adds some modern flair with long progressive movements, experimental noise, and clean acoustic sections throughout. Huge epic passages of atmosphere interweave with melodic lead guitars with full throttle blast beats and tremolos chasing after them. The vocals are a highlight for me. Crying out while Death tightens his grip around your throat, all future hope may be lost, but pensive emotion is not. The listener is forced to stare directly at the moment, feeling the full range of experience.

“Forfald” is an epic piece of music and the stand out track on the album. Right from the start we’re off into hypnotic riff territory. Solbrud really show off the full gambit of moods here: there are parts best enjoyed at home alone in a wallow of self pity. Other parts might best be spent jumping off logs playing air guitar alone in the woods à la Hot Rod. There are riffs so catchy they make you wanna sway side to side, and double base thick enough that even your pop metal friends know when to head bang. But there is also plenty of space to get lost in self reflection and contemplation.

The intro for “Besat af Morke” is a step out of the metal world and right into punk. I honestly thought I had switched albums. I was waiting for a “GO!” or maybe a funky bass line but at the least some gang vocals followed by a political tirade. It doesn’t last long but it fucking works and sets us up for the final march with darkness.

Vemod roughly translates to melancholy or sadness. But there is more to it than that, there is a longing underneath or nostalgia for the pain and sadness. I think it’s fucking rad these dudes use their native tongue, it adds to the mystery and atmosphere of the album. But after a half assed Google translation I am certainly left wanting more information. Nature and Death are common themes in all music, maybe none more so than metal. But Vemod, with its massive melodies, suffocating drums, and relentless timing changes brings something more than the usual misanthropic story we have heard a thousand times.

Maybe it’s approaching the subjects from somewhere that exudes personal freedoms and hope. Denmark might not exactly be famous for black metal but with Slægt’s Domus Mysterium, Orm’s masterful self titled debut, and now Vemod, 2017 has been a powerful year for Danish Black Metal.

Today we find that the future of humanity and the health of the Earth are more entwined than ever. While the Earth will recover and repopulate itself with life, the painful fact is humanity’s fate is far more certain to end in darkness.

Vemod is out now on LP, CD, and digital formats. Get it from Solbrud’s Bandcamp. Also via Vendetta Records or Indisciplinarian.

by Reese Burns on August 23, 2017
Here at the esteemed Indy Metal Vault Corporation, we like to show lots of love to our friends at Fólkvangr Records. Ever since the label’s conception, Fólkvangr has been something of a tastemaker. Mark signs what he likes, nothing more, nothing [...]
A

by Clayton Michaels on August 22, 2017
I know this is an odd way of beginning an album review, but bear with me for a second… Have you ever seen one of those charts of hop or grape styles hanging on the wall of a craft brewery or small vineyard? The ones that list the different aromatic or [...]
B+